Social network websites can feel like a gigantic task to manage if not done efficiently and correctly. This is especially the case if you are using multiple social networks and communication apps. The volume of information from social network sites can overwhelm people and make it easy to miss valuable messages and notifications. This can have major consequences if someone posts something inappropriate on your profile or you miss an important message from a potential employer on a professional network. This page has lots of useful tips and tools to help you master social networking.

Tip: Try to avoid signing up for email alerts. While useful, these will quickly take over your email inbox. Only use email notifications for important alerts that you need to address urgently.

Tools to manage you social networks

If This Then That (IFTTT)

IFTTT is a internet service that allows users to create chains of simple conditional statements, called "recipes", which are triggered based on changes to other web services such as Twitter and Facebook. An example recipe might consist of sending an e-mail message if the IFTTT user tweets using a certain hashtag. There are also Android and iOS apps that enable phone or tablet changes to trigger other activities. There is also a new companion app called 'Do' that can automate tasks on the press of a button.

You can use this to automate a lot of your social media management. For example, if you post something to Twitter, you can also get it posted to your Google+ and Facebook status. These kinds of recipes can save you a lot of time. IFTTT also integrates with productivity apps like calendars, Evernote and OneNote so you can trigger events based on activity on social networks.

Buffer is a software application designed to manage social networks, by enabling you to schedule posts to social networks including Pinterest, Facebook and Twitter. With tools like Buffer, you can limit the need to login to your social networks by scheduling posts ahead of time.

Pocket is a save-for-later service. Such services allow users to save interesting articles, videos and more from the web and other apps for later enjoyment. This means that when you see something you want to view or read later, you can save it into Pocket. This allows you to glance quickly through social networks, apps and websites and save items to read properly later. 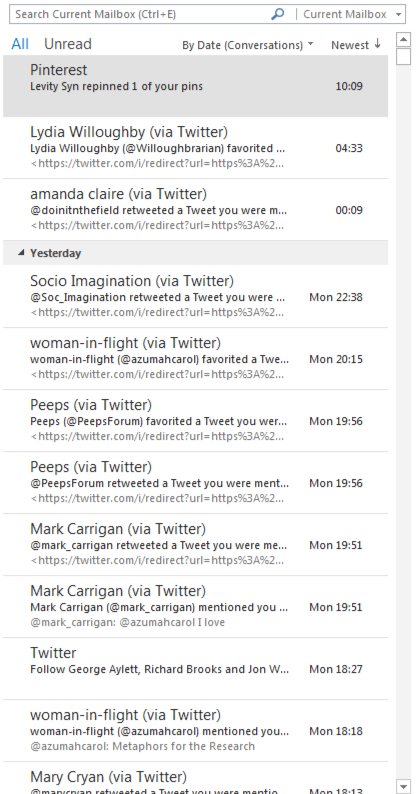