“...we recommend reading as many as possible articles regarding your fields of interest to examine how other authors have structured the presented information”

Research findings should be stated in clear simple English in a scientific report. Meandering, descriptive, decorative text is inappropriate. It should be impossible to misinterpret your findings.

Jargon is words or phrases that only specialist readers will understand. Using such jargon without explanation can make your work unintelligible to the majority of readers. Even if you are sure your supervisor or tutor will understand it, you should write as though they are intelligent non-specialists and make sure everything is explained sufficiently.

Some jargon is unavoidable and not every scientific word needs an explanation. However, always think if there is a standard English word or phrase that can be used instead. Also consider that some scientific tests etc may be superseded and so don't just assume that a future reader will know what they are testing for. Make sure you include such information.

These are a type of jargon that can actually be useful in certain circumstances; for example, where they are used to avoid repeatedly writing complicated phrases in full. In such cases always give them in full the first time you use them and if you need to use a lot of them, consider having a list of them at the beginning of your report.

Scientific writing needs to be brief - in depth concepts should not be made more complicated and confusing.

Redundant phrases should be avoided.  For example:

Avoid using unhelpful or unnecessary verbs in your writing, especially when describing what you did. For example, instead of:

Analysis of the DNA was performed using electrophoresis.

it is better to simply write.

The DNA was analysed using electrophoresis.

Choose your words carefully when you are writing science. In theory, someone who reads your scientific report should be able to repeat your experiments. Also, your reader should know exactly how your results relate to each other and to the results of others.

The use of vague adjectives in scientific writing is inappropriate - you need to convey your exact meaning. For example, is your large increase a ten-fold increase or a ten thousand-fold increase? Say exactly what you mean, avoiding any ambiguity.

Every argument in your scientific report should be logical. An argument is a final claim that is made based on at least one other claim. The final claim is known as the ‘conclusion’, and the claims that are used to support the conclusion are known as ‘premises’.

In a sound argument:

Remember who will read your work, and why they are reading it. Will your reader understand your explanations? Your tutor/supervisor will often understand the work already but you should write as though they may not. Do your explanations demonstrate that YOU understand everything? 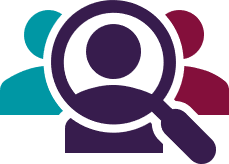 Draw inspiration from journal articles which you or your supervisor/tutor feel are well presented. Read through the articles that you have chosen, and ask yourself the following questions: 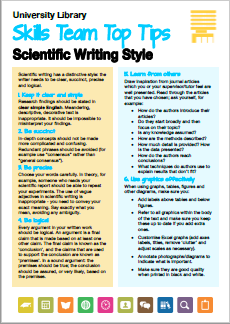 A single page printable guide with our top tips for writing in a scientific style.

Tenses are tricky. Even well respected journals differ in the guidance they give their authors for their use. The overall move is for increasing use of the present tense but this can cause difficulties, especially when describing your rationale and methods - where a lot of what you refer to or did clearly took place in the past. As with all scientific writing, the most important things are ensuring clarity and avoiding ambiguity.

Here we offer some basic guidance but this is by no means definitive. A more in depth consideration, looking at each section of a scientific paper can be found here: Verb tenses in scientific manuscripts.

When to use the past tense

Pitfall traps were placed every 25m on the sample line.

The core species showed a non-random pattern of site colonisation.

In an early study, Sharkey et al. (1991) found that isoprene emissions were doubled in leaves on sunnier sides of oak and aspen trees.

Had these been written in the present tense, it would imply that these were more universal, general findings which could be misleading.

When to use the present tense

Gel electrophoresis of DNA is one of the most frequently used techniques in molecular biology.

These results indicate that...

This study shows that...

Cautionary note: Ensure that you include as many caveats as are necessary to avoid unsubstantiated generalisations. i.e. These results indicate that in x circumstances at y time ...

Using the past tense can be more appropriate i.e. The results indicated that ... as this makes it more focused on your study.

When to use the future tense

Should this trend continue, it suggests that the population will rise by 12% over the next five years.​

Using the active or passive voice

What is the difference?

In a sentence that uses the active voice the subject of the sentence acts/acted:

In a sentence that uses the passive voice, the subject of the sentence is acted upon:

What is good about the active voice?

Passive: The claim that smoking caused lung cancers was rejected by tobacco companies.

What is good about the passive voice?

Active: The researcher placed pitfall traps every 25m on the sample line.

Passive: Pitfall traps were placed every 25m on the sample line.

However, if your focus was on digestive enzymes, then this can create better flow:

Digestive enzymes are produced and secreted by the pancreas. (passive)

So which is best?

The short answer is both. The best writing using a mix of active and passive voices. The most important thing is to make the decision purposefully rather than just habitually choosing the passive option.